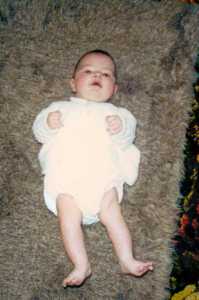 Note – This is from a personal perspective of how autism affects me and my profile.

Brain Damaged and/or brain injury is apart of the reason why I have autism and certain “pieces” of it would not have been there but this is due to circumstance and environment the difficult birth.

The placental abruption and oxygen deprivation that caused and stroke, left-right disorientation, visual perceptual disorders, language processing disorder (aphasia) and issues with internalising and externalising language and other developmental aspects.

A Human-Being – Everyone is Equal

I have no problem with seeing this a part of the issues I face nor do I have an issue with the terminology being used.

In the this world today words sometimes to have to be used as marker and my case this is maker of a clustering of symptoms that I have as a result of brain injury.

As I have stated in the title it just “is” and I am fine with this it doesn’t make me feel any more nor any less. I am “Paul” first (and to be honest always will be) everything else pales in the background of significance.

I have been dealt a set cards and I am going to use them to the best of my abilities. I am not a super-human, I am not the next generation of humanity, nor a super-being, I am not technical, logical or literal or “intellectual”. I am afraid I am just a person.

I would however I say that I am creative (like art, poetry, wordplay, soundplay, textures, patterns, colours and fashion) and idiosyncratic (I play to the own beat) , mercurial (I listen to my emotions) and solitary (I like moments of my own company).

All the other things are redundant to me in the bigger picture they apart of me they aren’t me.

I am just a person living life and that is really all. People can play with words all they want but sometimes it is better to get real if not for your sake then for others. 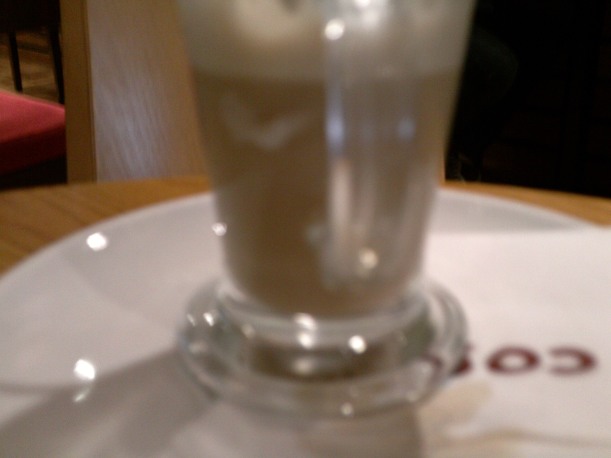 Note – This is from a personal perspective.

The Landscape of Words

Speaking and going on and on for the one’s sake not knowing the beginning where it started nor where it ended or were it should end the internal cluttering coming from within me like a tidal wave of phonics being spurted out in a “scatter gun” approach the receptive sounds coming into my consciousness.

I had a speech and language delay (I had no coherent words in my head until I was 7/8 years old) and the words are still whirling trying to pin point meaning, context, relevance, need, want, substance, creativity, what the other person wants, what I want it doesn’t always fit it at times is lack of coherence a kaleidoscope of feelings with no visual basis or formation

I will always try and have a go and feel by trying it is giving me more opportunities to integrate and connect.

In psychology, logorrhea or logorrhoea (from Ancient Greek λόγος logos and ῥέω rheo “to flow”) is a communication disorder, expressed by excessive wordiness with minor or sometimes incoherent talkativeness.

Sometimes I talk and talk but it doesn’t mean I understand or connect with what I am saying (the expressive function) and also the.

I don’t always process what the other person is saying (receptive function) this is in context is to do with with aphasia and the “cluttering” of language based auditory information. This is reflected in the content and the way in which I am expressing the information at the time.

In psychiatry, derailment (also loosening of association, asyndesis, asyndetic thinking, knight’s move thinking, or entgleisen) is a thought disorder characterized by discourse consisting of a sequence of unrelated or only remotely related ideas. The frame of reference often changes from one sentence to the next.

In the context of how I process words and my own emotions which is a condition called alexithymia (I connect with gesture, movement, tactile feeling, textures and tastes) my thoughts are buried beneath many hidden levels this can lead to thoughts ebbing and flowing from within me with multiple things being said from different areas.

The irregular retrieval means that I always trying to find words for emotions and the emotions come first so it happens in reverse causing the issues stated above also.

I will continue to try and find the things within me that connect with being human which make me feel inclusive, connected and integrated with the world around me using the tools i have learned to the best of my abilities. 🙂

Poetry from a personal perspective has helped me with these processes of word formation and emotions. 🙂 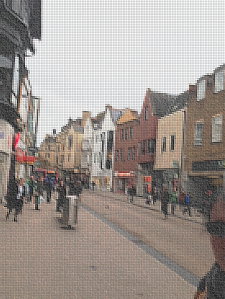 Note – This is a personal perspective of how I experiences Supermarkets

There are many ways in and strategies which I have used to navigate a supermarket over the years when I was a child I never knew what this “big colourful space” was that my parents used to take me to, I had no concept or connection with what it was as it was a bunch of fragmented images (that I would like or hate or get sensory “highs” from) noises that I couldn’t decipher and would like or dislike, kinesthetic sensory experiences were a way of connecting with the environment and experiencing the products in this fashion was very useful for me as it was building a bridge of connectivity.

So here is what helps me –

This helps reduce noise input not only do I have Verbal Auditory Agnosia/Aphasia (meaning deafness) I also have an Auditory Hypersensitivity which is greatly helped due to headphones – (imagine hearing every single sound all at once at equal volume) it helps me connect better with my surroundings and focus on the tasks of buying the products I can also get stuck on “words” and “sounds” that I hear which is also helped by the headphones.

These help and continue to help with processing visuals in light as I have Scotopic Sensitivity Syndrome/Light Sensitivity they help with reducing light “over” visual information, I also have Visual Agnosias – Prosopagnosia, Simultagnosia, Semantic Agnosia (seeing things in bits, without “meaning”  with a lack of depth 2D) this can cause problem with navigating surroundings. Although I still have  these agnosias and don not have a “visual memory” it helps me navigate surroundings much better, with reduced light input, less fragmentation and more visual depth and “real time”.

I wear clothing with “pressure points” I have Visuospatial Dysgnosia (body disconnection) so I have tight bracelets round my wrists, my hair is in a tight bun/ponytail, tight fitted shoes – This gives me “anchor points” for my body to navigate around the “space” around me.

I still “see” and “hear” without “meaning” and in the supermarket I still like to touch to perceive and map my surroundings by remembering my patterns of movement around the store, however I believe in positivity and healthy challenges for myself and this is one of them. I hope this helps. 🙂 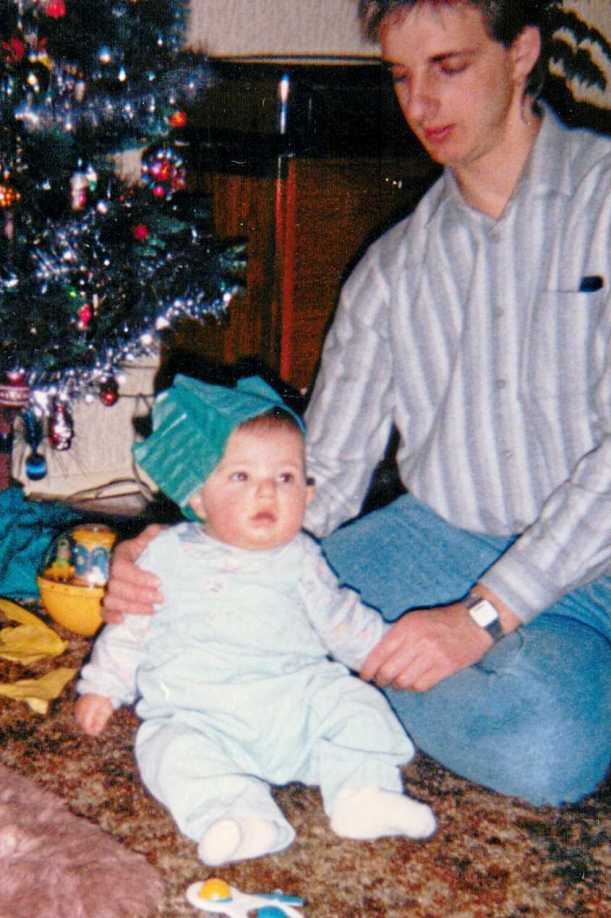 I certainly had Cerebral Hypoxia as apart of a difficult birth I was born a month premature and through Caesarian Section . The Cerebral Arteries also had a part to play in this also.

Which resulted in the following –

Stroke – Not not all these symptoms apply to me

Additional injury to the left hemisphere to the such as

and the rest such as Social Social-Emotional Agnosia, Alexithymia for example where genetics.

It is important to know the trajectory and the why’s and the hows? of how someone has Autism, all this being said I will not let this DEFINE my PERSONHOOD but it does continue to explain why a process and communicate in a particular way. 🙂 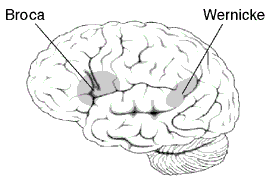 Note – this is a personal account of Aphasia all people on the spectrum have different profiles. 🙂

Expressive aphasia (non-fluent aphasia) is characterized by the loss of the ability to produce language (spoken or written). It is one subset of a larger family of disorders known collectively as aphasia. Expressive aphasia differs from dysarthria, which is typified by a patient’s inability to properly move the muscles of the tongue and mouth to produce speech. Expressive aphasia contrasts with receptive aphasia, which is distinguished by a patient’s inability to comprehend language or speak with appropriately meaningful words. Expressive aphasia is also known as Broca’s aphasia in clinical neuropsychology and agrammatic aphasia in cognitive neuropsychology and is caused by developmental issues or damage to the anterior regions of the brain, including (but not limited to) the left posterior inferior frontal gyrus or inferior frontal operculum, also described as Broca’s area

Sometimes even now I “lose” words “within myself” this is to do with “internal verbal fragmentation” word would just escape from mind and I would have no interpretive words to express, so I would use movements and sounds to create my own language and that was both functional and meaningful to me.

Auditory verbal agnosia (AVA), also known as pure word deafness, is the inability to recognize speech. Individuals with this disorder lose the ability to understand language, repeat words, and write from dictation. However, spontaneous speaking, reading, and writing are preserved. Individuals who exhibit pure word deafness are also still able to recognize non-verbal sounds.Sometimes, this agnosia is preceded by cortical deafness; however, this is not always the case. Researchers have documented that in most patients exhibiting auditory verbal agnosia, the discrimination of consonants is more difficult than that of vowels, but as with most neurological disorders, there is variation among patients.

Even now when people give me long litanies of verbal information the words will fragment back into “sounds” and I cannot process the words in real time it would be a mouth with sounds coming out of them but with no “meaning” – this at times can overwhelm and/or make me shutdown, ironically it is verbal overload which cases me the most pain.

Remember that language processing is diverse. 🙂 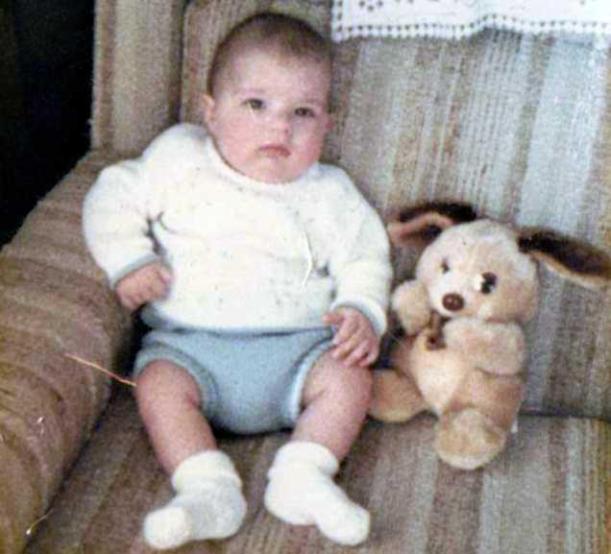 Me at 6 Months Old With My Teddy

The Autism spectrum is a diverse spectrum of different profiles or as Donna Williams puts it “Fruit Salads” and different profiles means different presentations – I myself was diagnosed with Autism in 2010 and through recent interesting and fascinating conversations with Donna here is why I have an Autie Profile.

Copyright D.Williams from her Blog Differences between Aspergers and Autism ‘fruit salads’? 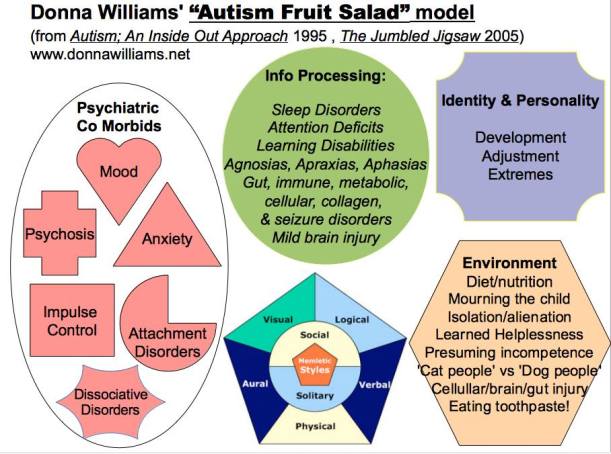 Donna Williams Analogy does expand on the true diversity of Autism and all it’s different presentations I hope this helps others as much as it has helped me.